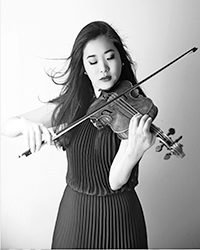 Maurice Ravel’s American tour of 1928 took him across this country to major cities, where he was greeted as a celebrity. He had already become fascinated with American culture after hearing jazz in Paris, and was eager to absorb the essence of American musical culture first-hand. His New York activities included hearing jazz at the Cotton Club, and perhaps most famously meeting the great George Gershwin. The story may be apocryphal, but was reported that when Gershwin asked to study with Ravel, the French master’s response was simply to compare their concert fees and suggest that perhaps the arrangement made more sense the other way around! In this program we’ll hear the best of France and America in musical synergy, in the expert hands of Kristin Lee and Orion Weiss. MAURICE RAVEL (1875–1937) Violin Sonata no. 2 in G major, op. 45 (1923–27) Allegretto Blues: Moderato Perpetuum mobile: Allegro